Hiroshi gets a job!

We don't usually have to agree on everything in our parenting beliefs.
But, one thing Kitson and myself were affirm on
was that we shouldn't spoon feed our kids
and serve life to them on a silver platter.
I believe kids needs hunger.
With hunger, comes drive.

Over indulging the kids with toys,
is a huge no-no in this household!
In fact, the only times they were allowed to get one
were only on special occasions like birthdays and Christmas.
And even so, they have to fall in between certain guidelines.

And the Ipad happens to not fall in that stringent guideline!

Hiroshi wanted one really badly.
So I told him,
the only way he could get it is to work for it.
Coz it ain't coming under the Christmas tree!

And he did.
He went for countless number of auditions.
But has failed miserably.
Thou in my own personal opinion,
I think he is the most adorable kid in town.
But, whenever he stands next to the ang-mo-ish looking kid,
there seems to be a bias vote for "exotic meats".

So when he gets this job he was literately over the moon.
We'll like to thank Gwen, Cubiz,Windows and Sony for the wonderful opportunity!

Over the period of 3 weekends in a row;
Friday, Saturday and Sunday.....
From 5pm to 9pm at Tampines Mall Courts
Hiroshi was required to demonstrate Microsoft Windows8
on one of Sony's latest touch screen laptop.

It was a walk in the park for him.
He has always been a gadget-y tech-y kid.
Plus, he loves showing-off presenting in front of huge crowds. 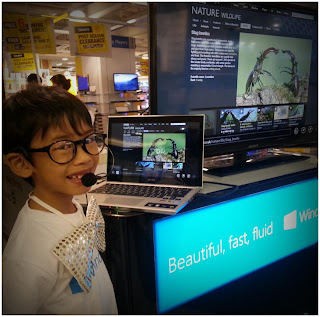 The only down side to the job was he has to repeat his presentation every 30mins.
That works out to about 7 shows per night.
Hiroshi could even read his script backwards
and demonstrate with both eyes closed after the first night!!

But, nevertheless, he was thrill over the idea of playing games
which he has downloaded from the windows store during the presentation!

We were thankful for friends and family who came to support. 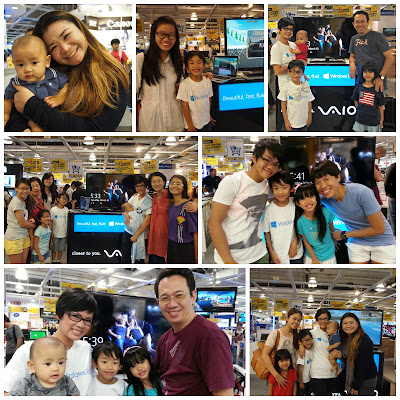 One of the parents I spoke to told me how lucky I was
to have Hiroshi motivated to earn his own pocket money at such a young age.
Thou in my own personal opinion,
this could be a double edge sword.

In the most ideal situation,
Hiroshi learns the value of money through hard work.
Thus learning to appreciate daddy the sole breadwinner.

Or if the job happens to be easy,
He might tell me there is no use for school and he wants a job instead!

But in God's grace,
everything played out nicely.
It was tough work for an eight year old boy.....
But yet, not tough enough to be classified as child labor.

As for now,
He is patiently waiting for pay day.
But the only difference is......
He doesn't want that Ipad anymore!
Now he wants that cool looking Sony Touch Screen Laptop with Windows8!

I hate to break it to him.
I think he needs more dough.
Unless the good people at Sony might like to sponsor him with one.
*big fat toothy grin*
Posted by B@bYh|r0Sh| at 5:34 AM

Haha! Too cute! Sony is pretty awesome (both my hubs and I are using Xperia mobiles), and erm, if he's willing to wait and grow his earnings in the bank, Hiroshi could wait for the upcoming Sony Xperia Tablet Z :P

Promote your Page too